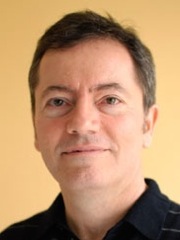 I am interested in the nuclei of galaxies, especially the nature and origin of nuclear activity. Active Galactic Nuclei (AGN) are the centres of some galaxies which emit tremendous amounts of non-stellar radiation. Such radiation is believed to be generated by the accretion of matter -- gas and stars -- onto supermassive black holes. This intense radiation has profound effects on the circumnuclear environment of these galaxies. There are numerous members of the AGN family, including relatively nearby Seyfert galaxies and the more distant quasars. Of particular interest to me is the origin of activity in Seyfert galaxies, especially the role played by the environment in which such galaxies are situated.

I am interested also in aspects of Galactic structure, particularly M dwarf stars. The overwhelming majority of stars in the solar neighbourhood, and indeed in the Milky Way Galaxy itself, are cool, relatively unspectacular stars called late-type (M) dwarfs and subdwarfs. These stars are so faint that they cannot be seen to great distances and are consequently difficult to detect. I am involved in studying how these stars behave within the Milky Way (kinematics), as well as determining their surface temperature and metal abundance using imaging techniques.